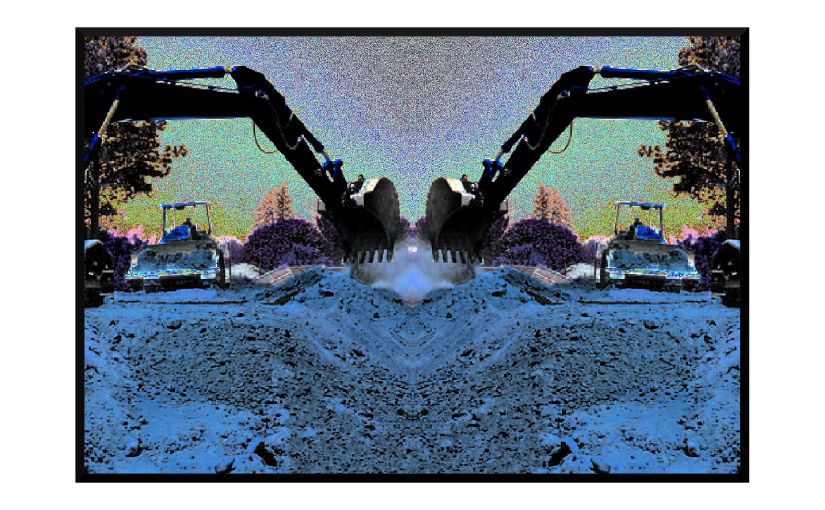 Dirt and grime between chiseled Madonnas waiting to be brushed clean, while the metal frame of the machine whines, coughs out more of those that’ll soon be put out to dry. You watch your brother, the squinted boy; watch mother bleeding more plaster into the feeder, before she packs the ready ones into cardboard cartons for another world on the flip side of the planet. Why don’t you go outside and play? Your brother keeps picking the hairs of a discarded plastic doll, thinks how the boys in the camp do that to him, keeps away. Counts the pebbles he brought from womb of the river further down the valley, lingers on the stilted home you’d been forced to leave. The day, like the one before, spools the sounds of tiny workshops, frequent squabbles of the evacuees, and earthmovers carving out a road through the hillside. The climate-displaced go about routine, barely there, while minds scoop scents and voices of crannies you’d rather be, movements slow, gathering a livelihood imposed on the hills folk. At night, mother tells stories about gods, the universe. Interpolates tales of the precision and power of nature; its generosity. Your brother and you imagine the machines you see—uniform and bountiful. Images of things greater than those you can think of, lull you to sleep. Wake up to the same drones. One morning, there’s a power cut. You rise to the trill of birds, rustle of the deodars, then a groan of the earth like a giant waking up. Madonnas fall on each other; get crushed underneath feet of a fleeing people. Why my life pivots on a broken spindle, your brother wonders, as mother drags him, while the ground beneath shakes still, still wiggles to break free from the shackles of tarred roads, gigantic dams and power lines. You trip over, footwear stamp your face. Shapes without names. Later, you ascribe identities—your mother’s, brother’s, the aunt next-door, the banshee-wallah. Nobody tells you about the hillside fallen in a heap on the other side, carrying with it things bigger than those you can ever imagine.

Mandira Pattnaik’s work has been published or is forthcoming in Watershed Review, Citron Review, Bending Genres, Splonk, Lunate, Gasher and Nightingale & Sparrow, among other places. She tweets @MandiraPattnaik.

NEXT – Sea Ice as Earth

PREVIOUS – December is my July